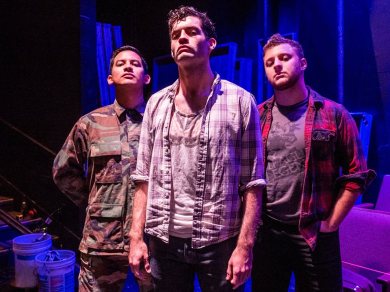 Created by, and set to the music of the 90s punk band, Green Day, American Idiot is a show that follows the story of three suburban boys, Johnny, Will, and Tunny, all fed up with their boring, middle class lives, and decide they want to head to the big city to find more excitement, more fun, more of whatever they feel their lives lack. Will’s dreams are dashed before he can even enjoy the idea with news that his girlfriend’s eggo is preggo, but the other two boys head off with fervor.  Both derailed barely a month after they arrive, Tunny abandons Johnny for the military, and Johnny turns to drugs.  The stories of these three intertwine and interweave, overlapping in a dynamic, rush of energy and intensity until the final moment that brings them all full circle back to the suburb they abandoned, a little more battered, but hopefully a little wiser.  And that is where the typical theatre experience ends.

ArtsWest has taken a huge gamble with the way they supported and produced director Eric Ankrim’s concept for American Idiot. From the minute you purchase your ticket, it’s a new experience because you have to make a choice:  observation or immersion?  Observers sit in 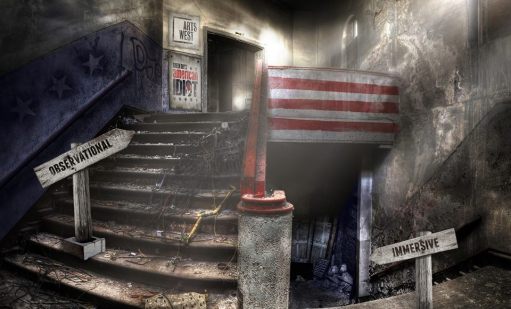 assigned seats for the show, while immersed get to choose one of three tracks to take where they follow cast members around the theatre space throughout the show.  I myself chose observation, because I am too old to be trapsing up and down stairs, being bossed around by angst-ridden kids, sitting on the floor or coming up through trap doors in the floor.  The immersion folks ran around a lot!  So, if you choose immersion, wear comfy shoes, because there was a chick there in cheetah print pointy toed stilettos and girlfriend was NOT having a good time!

So, you’ve chosen your adventure, you arrive at the theatre, check in for your adventure and then eventually land on the ArtsWest stage, only it looks so very different than it ever has before.  t’s been completely blown into an unorthodox seating set up, some seats practically on the stage, others under platforms where people are stomping around above you, and an amazing band tucked away, yet close enough so you can get lost in how much they are kicking ass with this music!  The energy is electric from the minute you step into the room, and with every new place you look, something exciting is going on.

I truly don’t want to give away too much, I’m just telling you, you must go see this show for the following reasons: 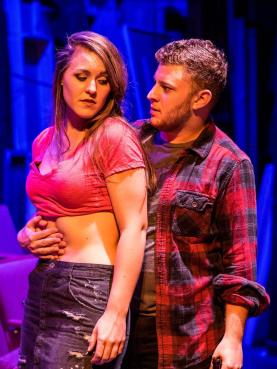 Chelsea LeValley as Heather and Michael Coale Grey as Will

2. The three lead male characters: Johnny played bye Frederick Hagreen, Will played by Michael Coale Grey and Tunny played by Justin Huertas are phenomenal all the way around!  Mr. Grey, especially, was acting his ass off, pulling my focus every time he was on stage.

3. The three romantic interests of these men are a voltaic trio that blew my mind!  Johnny’s Whatshername, played by the incomparable Kirsten Delohr Helland, 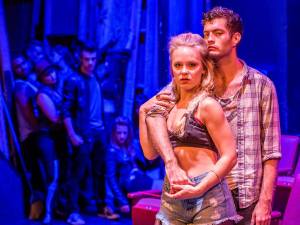 Kirsten Delohr Helland as Whatshername and Frederick Hagreen as Johnny

Will’s Heather, played by the powerful Chelsea Levalley, and Tunny’s Extraordinary Girl, played by the magnificent Jimmie Herrod elevated this show to a level that I have no words for, and yet anchored the performance at the same time in the most mind-blowing way.

4. The ensemble, this ridiculously talented ensemble, ran and jumped, and flew across the stage creating moment after moment, each more forceful and impressive than the one before!  Some familiar faces need to be acknowledged, because they absolutely dazzled me:  Nicholas James Tarabini and Ann Cornelius (both of whom you’ll remember I gushed about as Gabe and Diana in Next to Normal), Sheady Manning (one of my former kids all grown up and killing it out there), and Jordan Taylor (a new face for me, but I hope to see him on stage in many more shows to come!)

5. The music!  Sweet mother of the baby Jesus, the music!  Not just the powerful singers, but the friggin band!  Conducted expertly by Chris Ranney, the band was unbelievably on point!  The music direction, some of the best I’ve heard since I moved back to Seattle, so I hope Mr. Ranney and RJ Tancioco collaborate on more projects, cuz wow!

My two small points of criticism of this show both happened in the first half.  The distracting element of the immersion audience in the first half of the show was overwhelming and irritating at first.  The people aren’t quite sure what to do, there’s a frantic uncomfortable energy from them that was jarring at first.  But once they settled in to running around, it definitely got better and I stopped even noticing when they came and went.

The other element is that this cast, these young 2010s generation don’t seem to fully understand the 90s vibe of the need to get out of suburbia that the music of Green Day demands.  As a child of the 90s who grew up in a small suburban town, I remember feeling so stifled.  I loved Green Day’s music because they were singing about the crap I dealt with every day!.  There was no internet, no Facebook, no smart phones.  Television was the escape to the outside world and created an intense need to get out and away from boring mundane suburbia into anywhere else that would bring something new and exciting.  These kids in this cast have no frame of reference for that, given they can escape at the touch of a finger to the latest device in their pocket, so I didn’t fully buy the angst in the first part of the show.  But once the boys split off into their journeys, they locked in, and the rest of the cast followed, and I bought every real, electric moment from that moment until the last note rang out.

Bottom line, this show is worth the price of admission and then some.

It’s an electrifying journey full of passion, and power that will amp your pulse to match the emphatic and enigmatic rhythm like nothing I’ve ever experienced in all my years of seeing theatre.  I feel like this must have been how audiences of RENT must have felt back in 1996 when it hit the New York stage, and was played by passionate, powerful young actors.  ArtsWest has transcended American Idiot from a 90s story to a post 9/11 world, and did so with gusto!  My hat is off to the entire creative team for bringing the thunder with this one!  Bravo!

Trust me, get in your car, brave the West Seattle Bridge traffic, and let the brilliant cast of ArtsWest’s American Idiot take you on this journey that you won’t soon forget.

I give this a resounding, vigorous, applause followed by an enthusiastic
middle finger in the air! (PS, for this show, that’s a good thing!)
American Idiot just added more shows to the last part of their run because show after show is selling out.  Don’t miss out!  Go get your tickets, people!  Show time and ticket information can be found at ArtsWest’s website.