It has been a very long time since I went to the theatre and smiled the entire time!  I’ve always been a fan of the musical How to Succeed in Business Without Really Trying, but given its 1960s campy nature and goofy storyline, it can be a cheesy mess from the first note if not done well.  And people, the 5th Avenue not only did this show well, they knocked it out of the friggin park!

Let’s start with the music, shall we?  I’ve said in numerous of my reviews of musicals, if you’re going to do a musical, the music better be good, and the music in this show is impeccable!  The orchestra is so on point, I even loved the overture!  And I hate overtures!  And the cast, every voice up there on an even keel of excellence, I don’t even know where to start.

Oh yes, I do, let’s start with the show’s leading character, J. Pierrepont Finch played by the delightful and adorable Eric Ankrim.  This kid!  This ridiculously talented kid stole my heart right out the gate.  He brings to life the ambitious Finch in the most captivating way.  The protagonist in this story, Finch is a window washer hellbent on climbing his way up the corporate ladder by following the rules of a book called How to Succeed in Business Without Really Trying, and the show follows his journey from the mailroom to the boardroom, and all the steps in between.  He’s cunning, calculating, creative, and downright charming all the way through.  You root for him whether you want to or not, whether he deserves it or not, you just want him to get everything he desires because he’s so damn likable!  Outstanding acting, the perfect tenor voice, and wonderful dancing, Mr. Ankrim is a triple threat, the likes of which I haven’t seen on a young male actor since I moved back to Seattle.  I loved him so much, that his performance alone has me already planning another trip to the 5th Avenue to see this again.  Bravo, Mr. Ankrim, I’m a huge fan of yours!  Bravo! 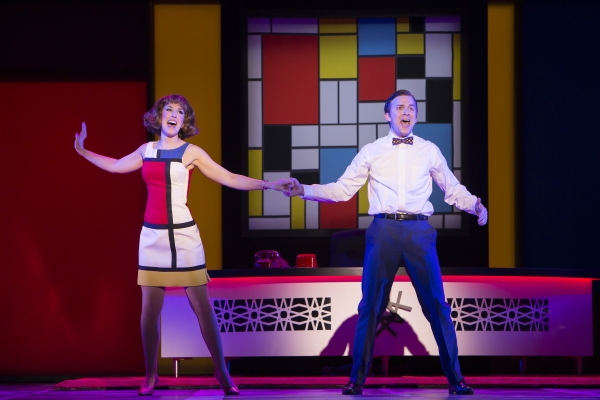 The leading lady to our leading man is a lovely secretary named Rosemary Pilkington, played by the incomparable Sarah Rose Davis.  I’ve been watching Ms. David on stage since her Issaquah Kidstage days, and to this day she is my favorite Eponine I’ve ever seen live.  But I digress, Ms. Davis has blossomed into one hell of a performer, and everything she did on that stage blew me away!  Her voice, as angelic as ever, but with a grown up strength and professional finesse.  Her acting, perfectly on point with stupendous comedic timing, matching Mr. Ankrim beat for delicious beat.  Her dancing, delightful and playful, and also just downright likable.  You root for Rosemary as much as you root for Finch, and the emotional journey Ms. Davis takes us on through this show will have you giggling along with her, pining along with her, and hoping and praying she gets all that her heart desires.  There are actors, and then there are stars, and Ms. Davis is definitely a star.  Broadway better get ready, because I’ve no doubt that is where she is headed, and it will be so amazing to watch the journey.  Well done, young lady!  Bravo, and thank you for an amazing night of theatre!

I could gush about each individual cast member in this show, which would keep you reading forever, so let me just say that all around the cast was phenomenal.  Each character fully developed from the CEO to mailroom boy to the left and everyone in between, each dance step perfectly danced, each note right on pitch.  They all worked together beautifully to bring this world to life.  I had so much fun!  Bravo to the entire ensemble!

But before I move on to the design and direction, I do have to call out one other performance that blew my friggin mind!  Hedy LaRue played by Jessica Skerritt.  People!

People!  People!  This chick’s acting chops, I can’t!  I just can’t!  She’s soooooooooo friggin good!  And I apologize for not being more eloquent, but there aren’t words for how amazing she is in this role.  And having just seen Ms. Skerritt in the Sound of Music in December, well, seeing her go from an Austrian Baroness to a mistress-extraordinaire both played beautifully, the range on this superb actress is just astounding.  She’s a true chameleon, and she stole this show for me.  Good on her for taking the risks she took with this role, for her commitment to this wonderful character, and for making me long to be tall with legs for days!  I’m such a fan of Ms. Skerritt’s and will go see anything and everything she is in, cuz wow!  Just simply wow!

Now, on to the design…every element was as impeccable and perfect as the cast!  The 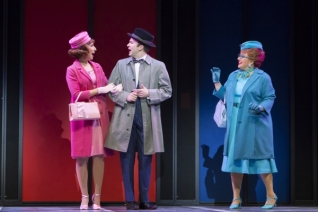 costumes, so period perfect, so wonderfully constructed, each new piece was better than the ones before.  The specifics that costumer Rose Pederson created in these pieces, from the specific color choices per character (Rosemary’s pink dresses were absolutely stunning), to the uniformity of the executives, to the flirtatious frocks of Ms. LaRue were absolutely dazzling.

The set design was a-maz-ing!  Color blocks of panels moving through the space as if choreographed along with the cast created a kaleidoscope of a world that kept me on the edge of my seat.  How would it move next?  Oh my god, that panel opens!?!?  What?  No it did not just slide that way!  Yeah, that’s how my brain went throughout this show overtime there was a scene shift.  I am so impressed with what scenic designers Tom Sturge and David Sumner pulled off for this show.  Bravo, fellas, bravo!

A show this big needs a solid director at the helm, and Mr. Bill Berry did a brilliant job with this show.  He cast it perfectly, staged it brilliantly, and clearly spent quite a bit of time on character development with each actor, because no matter if the stage only held Finch and Rosemary or if the entire cast was dancing and singing about the Brotherhood of Man, each actor on that stage was so clear in their intentions and character choices, that I was highly, highly impressed.  Mr. Berry’s concept for the show was crystal clear, he didn’t fudge with the script or try to make it something it wasn’t.  He embraced this Mad Men-esque world, and brought to life a fun-filled, lively show that anyone who sees it will leave with a smile on their face, and a song in their heart.  I know I was randomly just singing “Roooooooosemary” for at least a week afterwards.  Wonderful!  Outstanding!  Well done, Sir!

And much like Mr. Ankrim and Ms. Davis complimenting each other, so Mr. Berry’s perfect counterpart was music director Dan Pardo.  As stated above, Mr. Pardo’s music direction was fantastic!  Everything musical was perfect, every single note!

And I save the best for last, because the choreography!  OH!  The wonderful, beautiful, fun, feisty, fantastic choreography done by Bob Richard!  I. LOVED. IT!  Mr. Richard did the one thing I’ve been yearning for in a show: a choreographer who uses the talent of his dancers to the best of their ability.  Were there tap sequences?  Yes! But only by the dancers who could tap his combinations.  Were there complicated jazz sequences? Yes! But the strong jazz dancers.  And when the whole cast was moving on the stage, the choreography was perfectly suited for every dancer up there!  My favorite numbers were both in Act II.  Cinderella, Darling and Brotherhood of Man took a tie for gold for the best in the show.  Thank you for a wonderful show, Mr. Richard!

This show had so many ups, and the few down weren’t really downs, but perhaps nerves at the top of the show that fizzled and died quickly as this highly skilled cast leaned into each other to pull off one of the best night’s of theatre I’ve seen in a very, very long time. Congratulations to the cast, crew, and creative team of How to Succeed!  You earned the rousing standing ovation you got the night I was there by the entire audience, and will enjoy, I’ve no doubt a standing ovation every night for the rest of the run.  Bravo!

to the 5th Avenue Theatre and see this show before it closes on Feb 21!

Tickets and showtimes can be found on the 5th Avenue’s Website.